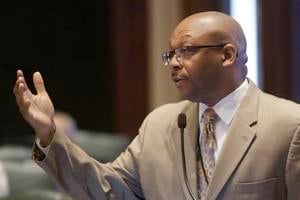 (The Center Square) – A meeting with suggestions on how to spend $350 million of new funding for K-12 schools in the coming fiscal year has been delayed, but some warn the proposals could alter a bipartisan funding formula.

The Dec. 6 meeting of the Illinois State Board of Education Professional Review Panel was postponed to Dec. 13.

“The date of the December meeting was changed to allow the group more time to solidify findings for their final report,” a spokesperson for ISBE said in an email.

The recommendations include things like teaching a foreign language. But, there are also suggestions for interventions to have a focus on racial dynamics, equity and increased bias awareness for teachers.

“About looking at equity, looking at inclusion, looking at how we’re serving kids of color, providing additional opportunities particularly for kids in those under-resourced schools,” Davis told The Center Square.

The draft proposals “recognize that students of color do not inherently need additional supports by nature of their race/ethnicity, but that these students do face inequities because of historical and existing structures, and there is a cost attendant with working to dismantle those inequities through training on antiracism and eliminating implicit bias within schools and districts.”

To address that, the proposal adds “a specific Professional Development cost … related to implicit bias and antiracism at a fixed per-pupil cost based on overall enrollment, with additional per-pupil dollar amount for all students where a district serves over 50% non-white students.”

“The school funding formula was a bipartisan win and further politicizing that is I think a disservice to kids,” Bourne said in an interview. “We need to look at what helps schools statewide, every school’s individual needs, and I’m not interested in individual carve-outs or special deals that are done under the guise of being politically correct.”

Bourne also said the focus should be more on educating children.

Davis said it may be nuanced, but the proposals will help students in disadvantaged areas.

“New terminology, new foci in terms of how you’re kind of dissecting students, if at the end of the day they can’t read or write then we’re failing anyway,” Davis said.

Davis and Bourne are non-voting members of the review panel.