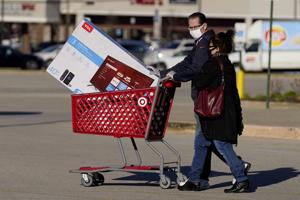 (The Center Square) – The holiday shopping season looks to have started on solid footing and it appears consumers are heading back to the stores.

Nearly 180 million shoppers made in-store and online purchases during the holiday weekend, exceeding the National Retail Federation’s initial expectations by more than 21 million. Black Friday remained the most popular day for in-store shopping with more than 66 million venturing out.

“I think people had COVID overload and they would like to get out, but the data does support it,” Michael Miller, associate professor of economics at DePaul University, told WTTW. “On Black Friday, we had lots of people visiting the stores.”

Mastercard Spending Pulse data revealed that sales in stores surged over 16% over last year as shoppers returned to malls likely after being vaccinated for COVID-19.

According to the NRF, retailers saw an increase in foot traffic over the weekend, with about 105 million shoppers visiting stores, up from 92.3 million in 2020. The overall number of online shoppers decreased to a total of 127.8 million from 145.4 million last year.

Mike Heuermann, general manager of Bass Pro Shops in East Peoria, said they experienced a large turnout over the weekend, noting there were more than 500 people lined up at the door on Friday.

“It puts a lot of pressure on the team to react and find other opportunities, but our consumer is very clearly out to shop and if they don’t find their preferred style, color or size, they are really going to the next available,” Johnson told Yahoo Finance.

Thanksgiving weekend shoppers spend an average of $301 on holiday-related purchases such as gifts, décor and toys. That is down slightly from 2020.

“The Thanksgiving holiday weekend remains a significant time for friends and families to check specific holiday items off their lists,” said NRF President and CEO Matthew Shay. “Over the last few years, consumers have shifted their holiday shopping plans to start earlier in the season.”