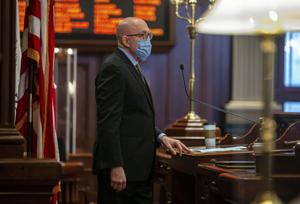 The leading Democratic state Representative underneath House Speaker Emanuel “Chris” Welch has been in office since 2006. He was appointed Majority Leader earlier this year after Welch was elected Speaker over former state Rep. Michael Madigan.

Harris, D-Chicago, has been intimately involved in budget negotiations for several years. He has also been involved in helping craft policies dealing with public health benefits.

“Greg Harris embodies public service and throughout his fifteen year career, he has been a passionate advocate for what’s fair and just,” Welch, D-Hillside, said in a statement. “His command of a wide range of public policy issues, particularly Medicaid and our state budget, has been such a vital asset to the entire state.”

“Greg led the way to deliver marriage equality, protected social service programs during the budget impasse and helped lower medical costs for everyday families,” Welch said. “As a values-oriented leader and as the first openly gay majority leader, Greg has given a voice to so many who have continuously felt left out of state government.”

Harris told CapitolFax.com he’s staying on to finish his term.

“While I will finish the rest of my term and continue leading our caucus through the annual budget process, I will not be seeking re-election,” Harris said. “I’m making this announcement now so people considering running for office have time to think and prepare.”