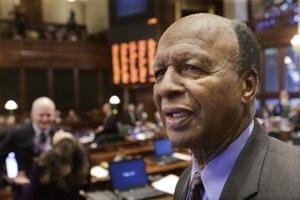 (The Center Square) – A new program to help people in prison apply for and receive valid state ID cards when they are released from prison Illinois Secretary of State Jesse White announced.

“The State ID Program for Returning Residents gives people who have served their time in prison a necessary tool as they reenter their communities,” White said.

Dave Druker, spokesperson for the secretary, said that the program has been in the works for a couple of years.

“This is a good thing for society. Everybody wins on this,” Druker said.

Six months before a prisoner is set to be released, the Illinois Department of Corrections (IDOC) will start the process of helping the individual secure the necessary documentation that he or she needs so that they can leave prison with a valid state ID, Druker said. People need a valid ID to restart their lives, he noted.

“The last thing you want is for people to have problems when they get back in society. You want them to be able to function and to find employment and housing. You need identification for all those things,” Druker said.

Once the documentation is collected, the IDOC will electronically transmit the applicant’s documentation, photo and signature to the Secretary of State’s office using a secure file transfer system mailbox. The inmate will get their valid state ID on the day they leave prison, Druker said.

“It can be an incredibly frustrating process for somebody who just left corrections. This is going to make it a whole lot easier,” he said.

One of the backers of the new ID effort for people leaving prison is Illinois first lady MK Pritzker, Druker said. The first lady has been involved in helping incarcerated people make successful transitions back to their communities once they have served their sentences.

“In many of my conversations with women impacted by the justice system, one major barrier to reentry was shared time and time again: obtaining a state ID card post-release,” the first lady said in a news release.

Gov. J.B. Pritzker acknowledged his wife’s work in getting the program up and running.

“I applaud my incredible wife, first lady M.K. Pritzker, Lt. Gov. Juliana Stratton and Secretary of State Jesse White for their work to ensure returning residents have what they need to put their best foot forward,” Pritzker said in a statement.

“A job opportunity, a roof over your head, stability – these fundamentals are so much easier to secure with a state ID card in hand,” the governor said.

IDOC Director Rob Jeffreys said the new program is an innovation that will help Illinois families break the cycle of incarceration. The program is expected to serve 27 IDOC facilities by April 2022.