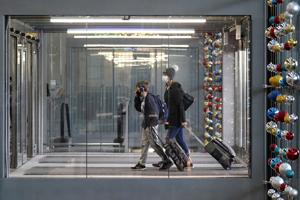 (The Center Square) – Some drivers can expect to pay more for Thanksgiving travel. Others hitting the road in electric vehicles may have to plan on where to charge up.

While airports Tuesday were experiencing high volumes of travelers, AAA’s Molly Hart said a lot of families are taking to the roads starting Wednesday.

“In regards to gas prices, they are high, obviously compared to last year with the pandemic,” Hart said. “But that does not seem to persuade people to not go.”

“So while the gas prices are higher than what they have been, they seem to be stable,” Hart said. “They may go up a few cents during the holiday season.”

Travelers through Illinois could try to avoid the state’s high gas prices by filling up in neighboring states, Hart said. She recommends the AAA smartphone app to find the lowest prices.

“And when you are driving, please, we want people to put that cell phone down, keep your eyes on the road, everyone remains buckled up and drive the speed limit,” Hart said.

Charging an electric vehicle is a fraction of the cost of filling up at the pump, but Bumper.com data analyst Julianne Ohlander said such drivers will have to plan where to charge up.

“So if you’re going a couple of hundred miles to get across the state, I think you’re okay to take your electric vehicle,” Ohlander said. “But, I think that most people traveling longer trips they would definitely want to plan out their route so that they know where they’re going to take their breaks.”

Across the country, more than 48.2 million Americans are expected to hit the road this Thanksgiving.

Tips to avoid being one of 400,000 motorists needing roadside assistance, include checking on tires, batteries, brakes, fluids and wiper blades.