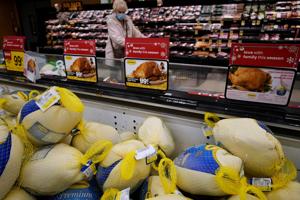 (The Center Square) – It is going to cost more for Illinoisans to stock the grocery cart for Thanksgiving dinner this year.

Assuming 10 family members and friends are at the table, the usual holiday menu of turkey, stuffing, sweet potatoes, rolls with butter, peas, cranberries, a veggie tray and pumpkin pie, along with coffee and milk, will cost an average of $53.31, or just over $5 a person, according to the American Farm Bureau Federation’s annual survey. That is up 14%, or $6.41 from the 2020 average of $46.90. The only item that dropped in price was the stuffing mix, down 19% from last year.

Adjusted for inflation, Thanksgiving costs are up for the first time since 2015 and 7% higher than last year, Farm Bureau data shows.

In recognition of changes in Thanksgiving traditions, the IFB price survey also includes ham, potatoes and frozen green beans. Adding those foods to the classic menu increased the overall cost by over $15 to $68.72.

“It is up and down the supply chain,” said IFB senior economist Mike Doherty. “It is the lack of truck drivers, it is every point in the shipping industry chain, it is energy costs. Energy costs play a much bigger role than people think.” That includes everything from transportation to keeping the turkeys frozen.

The price of the meal’s centerpiece, the turkey, has jumped considerably. According to the Farm Bureau’s volunteer shoppers, who reviewed food prices between Oct. 26 and Nov. 8, the average 16-pound turkey goes for $23.99, up 24% from last year.

Grocers have a large impact on food prices, which vary by region. Despite fluctuating costs for consumers, the farmer’s share of the food dollar remains a steady 8%.

“It’s important to remember that it takes a lot of hands and a lot of miles to bring the traditional Thanksgiving spread from the farm to the grocery store,” Illinois Farm Bureau President Richard Guebert Jr. said.