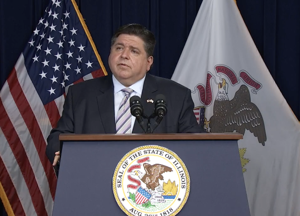 (The Center Square) – Illinois is one of six states in the U.S. that still has a statewide mask mandate and is the only state east of the Mississippi that still has such a requirement.

Gov. J.B. Pritzker implemented an executive order to re-introduce a statewide indoor mask mandate on Aug. 30, to help slow the spread of COVID-19 amid an increase of cases from the delta variant.

Since the reintroduction of the indoor mask mandate, COVID-19 hospitalization rates in Illinois have leveled off, and some COVID-19 metrics dropped below where they stood in June when Pritzker lifted most COVID-19 restrictions.

State Rep. Adam Niemerg, R-Dieterich, has spoken out against the governor’s mask mandate. Niemerg said that the mandate was a political decision.

State Rep. LaShawn Ford, D-Chicago, said that Illinois needs to do what it can to keep people safe.

“If it provides protection and it helps with the overall safety of the state, then we should do it,” Ford said. “We have not found any evidence that wearing a mask has any adverse effect on people’s health.”

The mandate was brought into effect by an Executive Order, which is a decision made by a Governor that is not up to a vote by lawmakers in the General Assembly.

Niemerg said that if this decision was up to a vote, lawmakers, and the people they represent, could have a say on the matter.

“I want this on the record so we can see the bad votes that they would make in support of the Governor,” Niemerg said. “But I also do believe that many legislators that would think twice about keeping the mask mandate intact.”

Ford said that while a vote on a statewide mask mandate would be a good thing, it could leave the door open for problems down the line.

“I’m not against a vote for the mask mandate, the problem is if we vote on it, we have to set a sunset date and when would we do that?” Ford said. “So with the Governor’s executive order, he can choose to withdraw that at any time.”