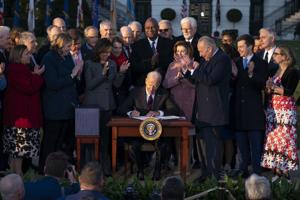 (The Center Square) – The federal government is set to spend $1.2 trillion on infrastructure, including billions for Illinois, but a central Illinois congressman said the spending measure is a sign of higher taxes and other spending programs on the horizon.

Before signing the measure Monday, President Joe Biden said the $1.2 trillion in spending will put the United States on pace to have better infrastructure than China over the next ten years.

“It will lead the world into the 21st Century with modern cars and trucks and transit systems,” Biden said. “We’re going to do this by building again and moving again.”

Biden tied it to a much larger plan spending on new social programs he’s proposed in his “Build Back Better” agenda. The infrastructure bill, he said, rebuilds the economy from the bottom up and from the middle out.

“As we did the bipartisan infrastructure bill it does not include a single penny of gas tax which I rejected because people under $400,000 would be paying it,” Biden said.

Back in 2019, Illinois Gov. J.B. Pritzker enacted a measure that doubled the state’s gas tax. Those funds will be used to match federal spending on infrastructure programs. Pritzker attended Monday’s signing ceremony in Washington D.C. Pritzker did not speak at the event.

While the infrastructure package that’s now law did have bipartisan support, U.S. Rep. Darin LaHood, R-Peoria, opposed the move. He said there should be spending on infrastructure, but the government needs to live within its means.

“It is not paid for,” LaHood told WMAY Monday morning. “About half of it is paid for by leftover COVID money, but a quarter of it is going to be paid for by taxpayers going into debt over the next eight years and frankly that’s not what was promised when the bill was originally introduced.”

The Congressional Budget Office estimates that deficit spending will be around $256 billion over the next decade.

The American Council of Engineering Companies of Illinois praised the president’s signature of the bill.

“Over the next five years, the federal infrastructure bill will invest over $17 billion in Illinois alone,” said ACEC-IL President and CEO Kevin Artl. “That means billions of dollars dedicated to rebuilding and redesigning interstates, repairing and replacing bridges, and expanding and modernizing airports.”

But, over the past few years, the Reason Foundation’s Annual Highway Report shows Illinois’s overall performance and cost-effectiveness ranking dropping from No 29 in 2016 to No. 37 last year. A new report with the latest rankings is expected out later this week.

LaHood said another problem with the infrastructure measure is that Democrats tied it to a much larger package that could spend even more on new social programs.

“Which is the ‘Build Back Better,’ which is a bill that again I could never support,” LaHood said. “It adds about $1.5 trillion to the deficit, it raises taxes and that’s a problem.”