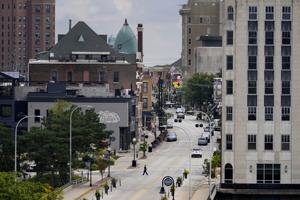 (The Center Square) – A temporary casino is now open in the city of Rockford as preparations continue for a permanent Hard Rock facility.

“It is done in a classy way that Hard Rock does things,” said state Sen. Dave Syverson, R-Cherry Valley. “And that’s why we’re so excited about having a brand like Hard Rock. This will be the only one in the state of Illinois and we’re lucky to get it.”

Syverson helped lead a years-long effort to land a license for his community that culminated in a 2019 gambling expansion package that allowed for up to six new licenses in Illinois.

“Working all these years, it’s … exciting to know we’ve got this venue and that we’ve beat Wisconsin to it,” Syverson said. “We just hope we can get the permanent site open as well so we can attract Wisconsin people down to Illinois.”

A massive entertainment project planned for Beloit, just north of the stateline, is slated to feature a casino, hotel, convention center, and waterpark. Preliminary work related to the final design is set to start soon, but a construction date has not been set.

“Anyone who walks through it won’t be calling it temporary,” said Rockford Mayor Tom McNamara. “They’ve transformed the convention space and conference space into a really beautiful casino. I think folks will be really excited and really proud of the work and the partnership that the city has developed with Hard Rock.”

It could be a couple of years before the permanent Hard Rock Casino is ready to open its doors. That facility, to be located just east of the temporary location, will include a 65,000-square-foot casino, a Hard Rock Café, and a 1,600-seat Hard Rock Live venue.

McNamara doesn’t believe the expansion will have a significant effect on the existing slot machines locations in the region.

“Those folks who go to specifically the slot parlors, it’s a different type of person who wants to go to a quiet parlor with four or five machines, have a cup of coffee, maybe chat a little bit with some friends,” McNamara said. “Then there’s someone who really wants to go for more of an event, more of an experience at the casino.”

City leaders already have earmarked a use for a portion of the tax revenue the facility will generate. The first $1.5 million will help fund the Rockford Promise program.

“If you live in the city of Rockford, your children go to Rockford public schools and they work really hard and earn a 3.0 GPA, we are actually paying for them to go to Northern Illinois university tuition in general fee free and the city covers those costs,” McNamara said.

Revenue estimates for the city in the first year of operation range from $1.5-to-$2 million. Upon completion of the permanent facility, the city should see about $7 million annually.

Syverson says gamblers who visit the new location are in for quite the experience.

“Not that gaming is the answer to everything,” Syverson said, “but I pushed this because I knew what was going to happen with Beloit. If we didn’t beat them to the punch and they built a massive casino in Beloit, Illinois residents would go up there and leave their entertainment dollars there. I knew that from a defensive standpoint, we needed to have a casino.”

Rockford is the first location to open a casino following a 2019 gambling expansion measure that allowed for up to six new gambling locations in Illinois.

The city of Chicago recently announced that it received five proposals from groups looking to build and operate a casino there. Meanwhile, state regulators have narrowed the possible location for a location in Chicago’s south suburbs to a site Homewood/East Hazel Crest and another in Matteson.

Downstate, an application for Danville Casino is still being processed by the Illinois Gaming Board. In October, the board approved changes to the license application for the Walker’s Bluff Casino Resort in Williamson County, placing it one step closer to becoming a reality.