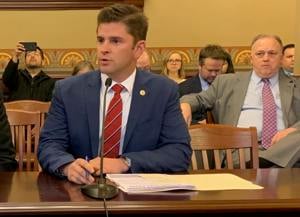 (The Center Square) – A new measure would prohibit candidates in judicial elections from accepting out-of-state donations and anonymous donations during campaigns for judicial positions.

Senate Bill 536 has passed both houses of the Illinois General Assembly. If signed by Gov. J.B. Pritzker, it would prohibit any candidate for a Supreme Court, Appellate Court, or Circuit Court position from accepting any campaign donations from out-of-state donors or accepting any untraceable campaign funds.

State Rep. Katie Stuart, who is the only House sponsor of the legislation, said that this change is something all Illinoisans can support.

“I think trying to avoid dark money from elections is something I think we can all get behind,” Stuart said. “So the change would stop out of state and untraceable money from finding its way into our judicial races.”

Republican State Rep. Ryan Spain, has spoken out against this bill. He called the measure unconstitutional.

“The ability to make political donations is an example of free speech,” Spain said. “I have concerns that this provision in this legislation is not constitutional.”

Spain also questioned the timing of a bill.

“For me, I am not comfortable supporting this bill here on the last day of veto session,” Spain said. “This has very significant changes that affect how we will handle our elections for judges in the state of Illinois.”

If Pritzker signs the measure, the legislation would go into effect immediately.