As lawmakers push for more electric vehicles, Illinois trails most of the country in charging station infrastructure | Illinois 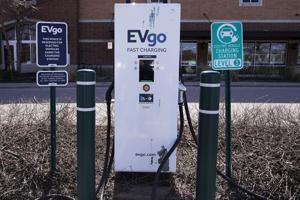 (The Center Square) – As the popularity grows for electric vehicles, Illinois is lagging behind the rest of the country in charging station infrastructure.

Governor J.B. Pritzker has a goal to have 1 million EV’s on the roads by 2030. The objective by the end of the decade was part of a green energy bill passed by Illinois lawmakers on September 15. Pritzker signed the bill into law shortly after it was approved.

According to Bumper.com, Illinois is ranked 35th in the country for electric vehicle charging availability with 153 charging stations per 100,000 people. Vermont, California and Maryland were the top three states for charging infrastructure.

“I wanted to get an idea of not just existing infrastructure, but also new growth in infrastructure to see which states were really hopping on the wagon with their EV infrastructure,” said data analyst Julianne Ohlman.

Ohlander said factoring in electricity costs in the state, it costs just under $32 to charge a vehicle in Illinois per 1,000 miles.

The website said Illinois gets high marks for EV buying incentives. Beginning in July 2022, the state is offering a $4,000 rebate if you buy an EV, and rebates of up to 80% for the cost to install a charging station.

There is money earmarked for charging stations in the massive $1 trillion infrastructure package, but not as much as President Joe Biden wanted.

“We’re going to build the first-ever national network of charging stations all across the country, over 500,000 of them, so you’ll be able to go across the whole darn country, from East Coast to West Coast, just like you’d stop at a gas station now,” Biden said.

The International Council on Clean Transportation said the country would need 2.4 million EV charging stations by 2030 if about 36% of new car sales were electric. In 2020, there were just over 200,000.

Abe Scarr, director of Illinois PIRG, an advocate for the public interest, said the state’s charging infrastructure will be key in the near future.

“A lot of people who may be interested in getting an electric vehicle may not have a garage and may not be able to just charge it, or they have had range anxiety about being able to drive around the state not knowing if there is infrastructure available for charging,” Scarr said.

While new electric vehicles can travel over 300 miles on a single charge, many communities in Illinois are considered “charging deserts” with little or no access to charging stations. Ameren Illinois said there are less than 60 EV charging stations across its downstate service territory.