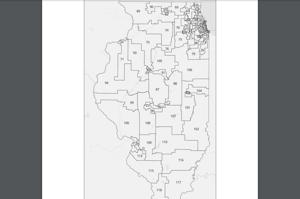 (The Center Square) – Plaintiffs challenging the Illinois Democrats’ legislative maps the governor enacted have filed their suggested changer, per a request from a federal panel of judges. That includes Republican legislative leaders who have for months refused to produce proposed boundaries.

Statehouse Democrats passed state House and Senate maps for the next ten years based on estimates in May. Several groups challenged the maps, saying the use of American Community Survey data produced malapportioned districts.

Republicans opposed the maps for using estimates. But they also were consistent in saying politicians shouldn’t be drawing boundaries and pushed for a nonpartisan commission to craft the maps for the next ten years.

In August, Democrats then passed revised maps based on the latest U.S. Census data released in September. Groups again challenged the maps in federal court.

The panel of judges ruled the May maps were unconstitutional and gave plaintiffs, including legislative Republicans, the Mexican American Legal Defense and Educational Fund, and a branch of the NAACP the opportunity to provide their recommendations to revise the maps the governor enacted in September.

On Wednesday, the plaintiffs filed their separate suggestions.

MALDEF’s filing says its proposal “creates Latino [Citizen Voting Age by Race and Ethnicity]-majority districts in the area with statutory and constitutional deficits.”

In one example of increasing Latino-representation districts, MALDEF’s filing says “it would undo the dismantling of [Senate District] 11 as a majority LCVAP district and give it a less bizarre shape.”

The East St. Louis Branch of the NAACP filed their alternatives.

“To summarize, [NAACP’s] remedial districts remedy the constitutional and Section 2 violation by drawing [districts] based on race-neutral, traditional redistricting criteria,” their filing says. “The remedial districts remain faithful to the legislature’s non-racial priorities for the Metro East region … preserving communities of interest, and minimizing the splitting of municipalities.”

“We submitted a proposal that fixes specific constitutional problems with the current map that had only served to keep entrenched incumbents in power,” said state Sen. Jason Barickman, R-Bloomington.

The Republican’s news release about the filing says the maps were drawn by the GOP’s legal redistricting team, “not incumbent politicians.”

“[The GOP proposal] nearly triples the number of Latino Senate and House Districts and adds another African-American district,” Barickman said. “Either the Governor didn’t really review the politician-drawn maps, or he agreed to protect politicians at the expense of Latino and African American voters in Illinois.”

The next hearing in the case is on Dec. 6.