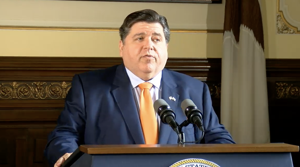 Experts said the rosy picture is propped up by temporary federal funds at the taxpayers’ expense.

The Governor’s Office of Management and Budget released a financial projection for the next five years showing tax revenues up and projected deficits are down.

“With our partners in the General Assembly we’ve made tremendous progress in putting Illinois on the right fiscal path, supporting small businesses, and creating good jobs in every part of our state,” Gov. J.B. Pritzker said in a statement announcing the report.

The GOMB report says income and sales taxes exceeded budget forecasts by “significant margins, leading to a $1.4 billion increase in the revenue forecast from those sources.”

As for spending controls, the GOMB report says Pritzker continues to instruct agencies “to prudently manage operations.” But the projections are also based on “no significant changes to base programs,” the report says.

“Even when you look out in the projections to the years three, four and five, we’re still running deficits of close to a billion dollars a year, as if that’s something good.”

Dabrowski said the governor makes it appear his administration and state lawmakers are managing things, but the real story is the tens of billions in federal taxpayer funds the state got.

“For individuals through stimulus checks, to the state government, local governments, $180 billion and that’s the only reason the tax revenues are up in Illinois,” Dabrowski said.

The state government got nearly $8.4 billion in COVID-19 relief. Around $3 billion was budgeted this year for things “like infrastructure, violence prevention, education, healthcare, affordable housing, and economic recovery,” according to the GOMB report.

“Net, net, it’s not a good budget for Illinois,” Dabrowski said. “The federal dollars might be hiding all the cracks, but the fiscal cliff will be bigger when all the federal money is gone. He’s created more pain for Illinois on top of the fact that we’re going to have massive inflation and other tax hikes to pay back these programs.”

And, full recovery may have been achieved, but the report notes economic expansion may be slow to grow.

“Though the economy at large has rebounded to pre-pandemic levels, the labor market has had inconsistent recovery with only a few periods of meaningful job growth,” the GOMB report said. “A full recovery is uncertain until the pandemic ends.”