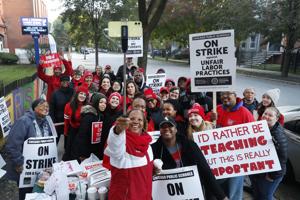 In a little over a year, Illinois voters will make two major decisions at the ballot box: First, who will be their next governor? Second, and more importantly, how much power will they hand over to public-sector unions?

While the gubernatorial race is sure to make headlines, the lesser-known Amendment 1 vote could wreck the future of Illinois’ economy and make union bosses more powerful than voters or elected officials by cementing broad, sweeping control into the state constitution.

Proponents of Amendment 1 say a constitutional amendment would be about keeping right-to-work out of Illinois, but what it would really do is boost the power of government unions to make demands that state law couldn’t control, and taxpayers would be expected to fund.

There are four parts of the amendment, each granting unions an unprecedented amount of power.

First, the amendment grants unionization ability to all employees in the state – private or public. This language is incredibly broad, and there is no wording in the amendment to limit its application. On its face, it doesn’t matter if the “employee” works for a government unit, a private company or even an individual. It broadly applies to all employees. Could Illinois’ future legislature be made up of unionized lawmakers?

Second, government union leaders could demand anything they want in negotiations. Unions have the power to seek anything “for the purpose of negotiating wages, hours, and working conditions, and to protect their economic welfare and safety at work.”

For example, the Chicago Teachers Union, which has tried to bargain over issues such as defunding the police and rent abatement, could attempt to claim a constitutional right to negotiate over those and other extraneous subjects. Where in the past Chicago Public Schools could have said it does not have to negotiate over these subjects, the district’s right to refuse to bargain could change under Amendment 1.

And then there’s the power grab that cements union control into the state constitution. Amendment 1 says “no law shall be passed that interferes with, negates, or diminishes the right of employees to organize and bargain collectively over their wages, hours, and other terms and conditions of employment and work place safety.” While on its face this may seem to protect workers, in reality it shields union leaders by preventing state lawmakers from providing accountability in the law.

The legislature won’t even be able to pass legislation defining terms like “employee” or clarifying which subjects can be negotiated because the amendment will be more powerful than state law. Lawmakers also won’t be able to change the current law that allows many government union contracts to override contrary laws and regulations.

Finally, the fourth tenet of this amendment is to ban right-to-work laws in Illinois. This comes as no surprise since union leaders would prefer to force unionization, but it would be unconstitutional as it concerns state employees. In Janus v. AFSCME, the Supreme Court reestablished the right of government employees to choose not to pay dues or fees to public-sector unions.

But what Amendment 1 really boils down to is simple: money. When there is no limit on what unions can do and no legislative checks and balances available, there is no accountability on spending. That means even higher taxes for Illinoisans.

The focus of the 2022 election may not be this amendment, but what exists in the state constitution will outlast whomever assumes the governor’s mansion next.