Lawmakers back teacher sick pay bill, but will Pritzker sign it? | Illinois 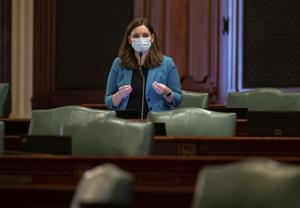 (The Center Square) – A bill that would give school employees their full pay for days missed due to COVID-19 could soon be sent to Gov. J.B. Pritzker’s desk for approval, but it’s not yet clear if he will sign it.

House Bill 2778 has passed both chambers of the General Assembly.

If an employee is required to isolate or quarantine, the COVID School Employee Benefit and Wage Protection Bill requires employers to provide employees with as many administrative leave days needed to follow all public health guidance, mandates and requirements issued by the Illinois Department of Public Health. In addition, employees would get administrative days if they need to care for their child in elementary or secondary school who was sent home because of COVID-19 protocols.

The legislation was met with some opposition from lawmakers and parents concerned about the costs of the measure.

“I think this bill has some massive flaws, and the sponsor has been unwilling to work with opponents to get to a better place,” Bourne said. “I am opposed to this bill, and so is the Governor.”

The legislation is not funded, which means it could mean higher taxes for Illinoisans and higher costs for school districts. School district get the majority of their funding from property taxes.

“We have heard from many school districts that this is a massively unfunded mandate,” Bourne said. “It was not negotiated at all with the stakeholders.”

The Illinois Education Association said districts could use Elementary and Secondary Education School Relief dollars to cover the cost of the measure, noting that Illinois got $5 billion in ESSER funds.

Bill sponsor Janet Yang Rohr denied that Pritzker and some of the school districts were opposed to the bill. She said during debate that they simply have not to take a position.

“I believe that part of the opposition comes from them being in negotiations and as a result did not want to take a position on some of the issues this bill brings up,” Yang Rohr said.

While the bill passed both chambers, it didn’t get enough votes to withstand a veto from the governor.

“Currently, our educators and school employees are exhausting their sick time when they must quarantine because of COVID-19. Many students are too young to be vaccinated, which makes quarantining even more important for our students’ safety,” IEA President Kathi Griffin said in a statement. “And in cases of teachers who are in the beginning of their careers, we are seeing them run out of their accrued sick leave and instead of losing their income, they choose to go to work sick or leave the profession to find another job. Both of these options cause harm to students. We want what’s best for all – to keep students in school and keep everyone safe. This is a big step toward helping with that.”

The IEA is asking people to encourage the governor to sign the bill. The governor’s office did not respond to a request for comment on Pritzker’s position on the measure or if he would sign it.