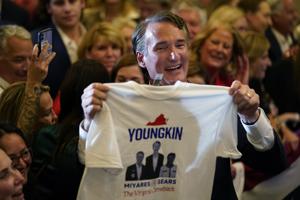 (The Center Square) – It’s a year out from the Illinois gubernatorial election and Republicans vying for the job hope there’s momentum from the Republican victory in Virginia Tuesday.

Virginians elected their first Republican governor in 12 years by picking Glenn Youngkin over Democrat Terry McAuliffe. Analysts across the country say that could signal a trend giving Republicans an advantage heading into the November 2022 midterm elections. That’s also when Illinoisans cast votes for governor.

Gov. J.B. Pritzker, a first-term Democrat who unseated former Republican Gov. Bruce Rauner in 2018, is up for reelection next year.

Four Republicans are vying for the GOP nomination. The primary is in June.

One of the major issues in the Virginia race was how school districts are handling certain curriculum touching on issues of race and other school policies.

Businessman Gary Rabine said voters in Virginia rejected far-left policies and he expects Illinoisans will do the same next year.

“While Pritzker was not on the ballot in Virginia, his far-left views were,” Rabine said in a statement. “Voters in Virginia rejected woke politics and I am confident voters in Illinois will do the same.”

“Illinoisans are fed up with corrupt, partisan politics and the blue-red divide and just want to know that their communities are safe, the economy is strong, and they can give their kids the best possible future,” Schimpf said in a statement.

“[M]others and fathers and people from all walks of life stood up and spoke loudly against a government that has reached into their homes, their schools, and their lives,” a Sullivan spokesperson said in an email. “Leadership is about prioritization, and time and time again, J.B. Pritzker and the radical legislature has prioritized virtue signaling and personal aspirations over the lives and livelihoods of working people.”

And while Illinois’ gubernatorial election isn’t for another 12 months, Bailey said the momentum from Youngkin’s win in Virginia will persist, especially after the recent veto session where Illinois Democrats passed controversial legislation.

“I don’t think anyone is going to forget this anytime soon,” Bailey said. “I think momentum, yes, will build and it’s going to build even much more than it did in Virginia.”

Messages seeking reaction from Pritzker’s campaign and the Democratic Party of Illinois were not returned.