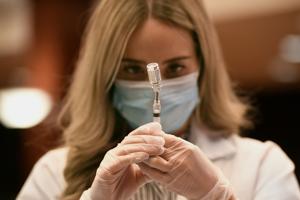 (The Center Square) – Six nurses employed by Riverside Healthcare in Kankakee who filed a lawsuit against the hospital over what they claim is their right to refuse the COVID-19 vaccine have been met with support from other Riverside workers.

The lawsuit started when Neelie Panozzo, Amy Memenga, and four other nurses, whose names have not been released, were notified by Riverside Healthcare officials that they would be terminated by Oct. 31 if they do not get vaccinated against COVID-19.

Since the initial decision in court, 56 other Riverside workers have asked to join the lawsuit against the hospital.

The nurses are represented by Daniel Suhr of the Liberty Justice Center. Suhr said that even with the initial win in court, Riverside Healthcare is not changing its stance for other workers.

“Despite the judge’s ruling protecting Riverside nurses from being fired, the healthcare system’s leaders have refused to extend the same right to all of its employees,” Suhr said.

With the women being granted a temporary restraining order and the hospital refusing to change its policy, 56 other workers at Riverside have asked to be a part of the lawsuit.

Suhr said that the support from other workers shows how changes need to be made.

“The fact that 56 additional Riverside healthcare workers have stepped forward to join this case shows the need for a robust protection for rights of conscience for all employees,” he said.

The Liberty Justice Center said that it is devoted to protecting workers’ rights to refuse the COVID-19 vaccine and said that the lawsuit is important for workers across the state.

“While Riverside has been especially egregious and especially public about, we are concerned that there might be other employers out there who are not taking seriously their legal obligation to respect the conscience rights of their employees,” Suhr said.

Since the lawsuit was filed, the state has seen similar action taken against hospitals and healthcare centers. NorthShore University Health Systems as well as Quincy Medical Group have seen similar suits brought against them.

“We are unwavering in our belief that requiring our employees to be vaccinated or receive an approved religious/strongly held belief or medical exemption will allow us to provide the safest environment possible, and that the criteria we’ve been using to guide our decisions are fair, justifiable and clearly focused on protecting the health and safety of our patients and workforce,” the hospital system said in a statement.

“We continue to be deeply grateful for every member of our team, the vast majority of whom have already received the vaccine or an approved exemption.”

The temporary restraining order issued by the Kankakee judge in state court is in place for four Riverside nurses until Nov. 19 when the judge will hold a hearing on the Motion for Preliminary Injunction to offer ongoing protection.