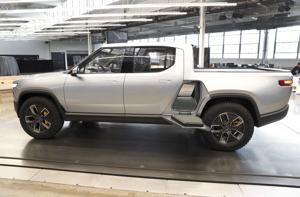 (The Center Square) – To lure manufacturers of electric vehicles and parts suppliers to Illinois, lawmakers passed the Reimagining Electric Vehicles Act during the final day of the fall veto session.

“I wear this today and the next day you see someone wearing the same tie and you joke around and ask if they were digging through your dirty laundry,” Davidsmeyer said. “This is like the governor is digging through our file cabinet because we already brought this stuff forward.”

Illinois currently ranks ninth in the nation in auto production. The state already has a leg up in the electric car industry with Rivian Motors in Bloomington-Normal.

“Illinois is in a position to turn the corner, change the perception of the state and make everyone realize that in the Midwest we have a chance to be the EV hub in the country,” said state Rep. Mike Zalewski, D-Riverside.

A sponsor of the REV Act, state Sen. Steve Stadelman, D-Rockford, said the measure is about jobs.

“Many regions will see this as an economic opportunity that could bring jobs to residents and make a lasting impact on their community,” he said.

Stadelman said the Stellantis plant in the Rockford area is incentivized by the REV Act to create jobs. Stellantis, which currently produces the Jeep Cherokee in Belvidere, is in the process of determining sites for manufacturing electric vehicles.

Business groups were divided over the legislation. The Illinois Manufacturers’ Association supported the measure, but the Illinois Chamber of Commerce expressed concerns that so-called labor peace agreements required under the legislation would cause some companies to go elsewhere.

“This measure positions Illinois to become a national leader in electric vehicle and battery production by providing incentives to encourage economic investment as well as keep and grow good-paying manufacturing jobs in an exciting and flourishing industry,” said Mark Denzler, president and CEO of the Illinois Manufacturers’ Association.

Pritzker lauded the passage of the measure.

“With the passage of the REV Act, Illinois is making clear that it intends to be a leading state in the burgeoning electric vehicle manufacturing industry. As a leader in clean energy and as a global transportation hub, Illinois is an ideal home for this important climate-friendly industry,” the governor said in a statement.