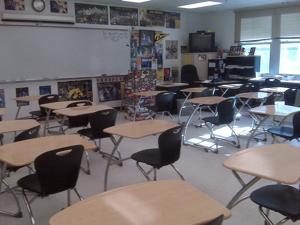 For 30 years, Deb Roti was a special education teacher at a public school in Cary, Illinois, and saw firsthand how Illinois prioritizes administration over education.

“It is my firm belief that we have too many administrators making huge salaries that will require larger and larger pension payouts,” Roti said. “The numbers reported on the largest pensions upset everyone, including teachers and rank-and-file police and firefighters.”

“Huge salaries and large payouts for the top pension-earners take money and resources that could be used to attract talented personnel and invest in resources for students and communities.”

Public schools in Illinois have 4,120 unfilled teaching positions, more than double the number from 2017, according to the Illinois State Board of Education. The minimum wage for a teacher in Illinois was set to $32,076 for fiscal year 2021 by state law.

Add high salaries from too much administrative overhead to vast pension debt and the two crowd out investment in schools, classrooms and students. They also are driving property taxes so high that Illinois homeowners pay double the national average, with only New Jersey’s property taxes higher.

Roti and her neighbors could see a $1,317 average savings on their property tax bills just by consolidating the four separate school districts they help support, according to an analysis by the Illinois Policy Institute.

Roti worked in Cary, a far northwestern suburb of Chicago, where the population is 18,271. Cary Community School District 26 has five schools with 16 administrators. Next door is Prairie Grove District 46 with eight administrators overseeing two schools for a town with a population of 1,805. Neighboring Fox River Grove 3, population 4,854, employs four administrators for two schools.

“This equates to over 28 administrators within a small area,” Roti said. “And all these feeder schools go to the same high school, which is a separate district with more administrators.”

Illinois has 852 school districts and nearly half serve only one or two schools – just like both Prairie Grove and Fox River Grove that Roti’s taxes help support. All that excess bureaucracy leads to high costs: Illinois spent $1.27 billion on district-level administration in 2020 for 1.9 million students. Florida is able to serve 2.8 million students for one-fifth that cost.

One solution almost passed the Illinois General Assembly last spring – until teachers unions derailed it. The idea is still viable, though.

The Classrooms First Act would create a commission to make specific recommendations on the consolidation of school districts with a goal of decreasing the number by at least 25% across Illinois. Parents, teachers and all other residents would have the opportunity to contribute through a public comment period with hearings across the state. All district merger recommendations would require voter approval, with a majority of voters in each affected school district agreeing to the change. This maximizes local control.

Consolidation would apply only to districts – the administrative units overseeing schools – and the Classrooms First Act explicitly prohibits recommending school closures. But were administration of the separate grade school districts and high school district consolidated, it would free up $38.2 million in Roti’s community that could help improve classroom instruction, increase teacher pay or provide property tax relief.

“The pension problem in Illinois is multi-faceted and misunderstood,” Roti said. “Now, we have huge shortages of teachers because salaries are low in Illinois for educators, and due to the pension crisis, the state can’t even promise they will have money to support teachers who are already retired. It’s decimating the education field.”

The Teachers’ Retirement System is obligated to fund over $80.7 billion in pension promises for which there are no funds. That threatens the retirement security of current teachers and retirees. The system has 40% of the money it will need to meet future obligations, which pension experts see as so low it may be a point of no return from which only major infusions of taxes or major changes to benefits can keep retirement checks coming.

Pensions eat more and more of Illinois’ education dollars, taking away from the number of teachers and their pay. The state has made a 200% increase in spending on teacher pensions since 2000, compared with a mere 20% increase on classroom spending during that period.

A “hold harmless” pension reform plan developed by the Illinois Policy Institute for the five statewide pension systems could save roughly $2.4 billion for the state budget the first year and more than $50 billion through 2045. The plan would also totally eliminate the state’s pension debt during that time, rather than the 90% reduction state leaders hope for. It accomplishes all of that while preserving every dollar of pension benefits promised to public workers for work already performed.

Without real pension reform, hundreds of schools across the state will continue to be forced to cut programs, increase class sizes, lay off teachers or hike property taxes as more and more new state dollars are directed away from classrooms and toward district administration and overpromised retirement benefits.

Teachers work hard every day for their students and communities. School district consolidation and constitutional pension reform can ensure teachers such as Roti are fairly compensated, have a secure retirement and don’t face ballooning property tax bills that threaten their ability to stay in their homes.

Ann Miller is a staff writer at Illinois Policy Institute