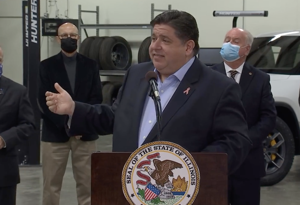 (The Center Square) – There are about 35,000 electric vehicles on Illinois roadways, so the state’s goal of one million by 2030 could be called ambitious.

The objective of one million electric vehicles by the end of the decade was part of a green energy bill passed by Illinois lawmakers on September 15. Gov. J.B. Pritzker signed the bill into law shortly after it was approved.

“Illinois is at the center of the action for investment and growth during this economic recovery, and nowhere is that more true than when it comes to electric vehicle manufacturing,” said Pritzker while visiting an electric vehicle training facility Thursday in Normal.

To help achieve the goal, beginning in July of 2022, the state is offering a $4,000 rebate if you buy an EV, and rebates of up to 80% for the cost to install a charging station.

Currently, the federal rebate for eligible electric vehicles is up to $7,500, which could grow to $12,500 if the federal government passes the multi-trillion-dollar social spending package.

Abe Scarr, director of Illinois PIRG, an advocate for the public interest, said the state’s charging infrastructure will be key.

“A lot of people who may be interested in getting an electric vehicle may not have a garage and may not being able to just charge it, or they have range anxiety about being able to drive around the state not knowing if there is infrastructure available for charging,” Scarr said.

While new electric vehicles can travel over 300 miles on a single charge, many communities in Illinois are considered “charging deserts” with little or no access to charging stations. Ameren Illinois said there are fewer than 60 EV charging stations across its downstate service territory.

Lawmakers are also considering legislation that would give tax credits to companies producing electric vehicles and batteries in the state.