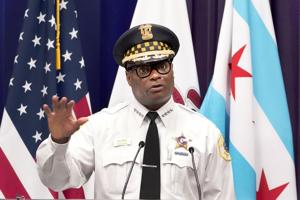 (The Center Square) – Police agencies from around Illinois are being asked to pick up the slack after thousands of Chicago police officers didn’t report their vaccinations status before a city deadline.

About 4,500 Chicago police offices didn’t report their vaccination status by the deadline.

A judge told police union boss John Catanzara, who has been vocal in his opposition the vaccine mandate, not to comment on the city’s vaccine policy, but he posted a message on YouTube.

“Everybody has to do what’s in their hearts and minds, whatever that is, but I will just leave you with this. Policy starts at the top in this city, and it has been proven time and time again, the top of this city’s policy needs to change,” Catanzara said.

Illinois State Police are making plans to send additional personnel to Chicago in the event of a shortage of police officers. The Cook County Sheriff’s department already assists city police in high crime areas in Chicago.

“We have in fact deployed them when asked over the last 18 months and we will continue to make that offer,” Gov. J.B. Pritzker said.

The Illinois Law Enforcement Alarm System reportedly sent an email to police officials in Kankakee and other surrounding areas asking if they could assist with critical situations in Chicago.

Kane County Sheriff Ron Hain is not on board with the plan.

“I will not send my personnel to Chicago unless an officer is under direct duress because I cannot support this slanted agenda,” Hain said in a statement posted on the department’s Facebook page. “I also will not allow my deputies to be subjected to use of force in the city and be under the prosecutorial jurisdiction of the Cook County State’s Attorney.”

Chicago Mayor Lori Lightfoot has assured the public that there are contingency plans in place should there be a shortage of officers, but blames the police union bosses for spreading bad information.

“What we’ve seen from the Fraternal Order of Police and particularly leadership, is a lot of misinformation, a lot of half-truths and frankly flat out lies, in order to induce an insurrection, and we’re not having that,” Lightfoot said.

The police union has filed a lawsuit alleging Lightfoot, Police Superintendent David Brown, the city and the police department have failed to comply with the collective bargaining agreement’s “status quo”.