In spite of fungal disease challenges, 2021 turns out to be a ‘decent’ year for Illinois corn | Illinois 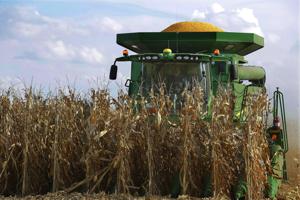 (The Center Square) – Illinois corn farmers were looking forward to a record harvest in 2021 until tar spot, a new fungal disease, threw a wrench into the calculations of some growers.

Randy DeSutter, president of the Illinois Corn Growers Association, said he will remember 2021 as the first year that tar spot, a disease that originated in Latin America and first showed up in Illinois in 2015, made a significant impact.

“I was actually expecting a record year. But when all this tar spot took hold, and killed plants early, we lost 25 to 30 bushels on average,” DeSutter said. “The corn all died ahead of when it should have. So the yields are still decent, but they are not as good as what we hoped for in August.”

Cornstalks were weakened by tar spot and another disease that Illinois corn farmers have more experience fighting: anthracnose. The condition of the stalks made the corn more difficult than ever to bring in, DeSutter said.

“The corn isn’t standing very well at all. It’s very hard to harvest. It’s falling down. Some of it is laying on the ground and the combine just can’t pick it up,” DeSutter said.

A big windstorm, which Illinois farmers typically endure in September or early October, would have been devastating, DeSutter said.

Because of the condition of the stalks, a lot of farmers rushed to harvest their corn crops in September this year, for the first time ever.

“We started harvesting on Sept. 9, and we just went straight through because we were so fearful that we wouldn’t be able to get it – with it all falling down,” DeSutter said. “We’ve never had all our corn picked in September.”

DeSutter began growing corn and soybeans with his father Maurice and brother Jim on their farm in Woodhull in western Illinois in 1979. His son Matthew and his nephew Drew have since joined the operation.

“Grain prices are at the high end of the scale, and that’s what counts the most,” DeSutter said.

Farmers will need the profits to get ready for next year.

“We’ve got a lot of good things going with the prices up, but then everything else is following suit to dampen it,” DeSutter said.