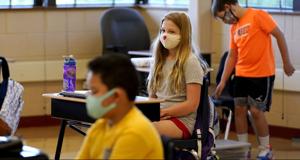 (The Center Square) – A judge in Effingham County has issued a temporary restraining order against the Illinois State Board of Education and reinstated the recognition status of two public schools that aren’t following the governor’s COVID-19 mask mandate.

The case was brought by attorney Thomas DeVore on behalf of Red Hill, Woden-Herrick and Beecher City school districts.

While Red Hill schools were at one point on probation for not having a mask mandate, they complied with ISBE’s mandate and their status was returned to recognized.

“Beecher City and Cowden-Herrick’s recognition status is hereby restored to ‘fully recognized’ instanter [immediately] until such time as the Court has held a preliminary injunction hearing and ruled on the District’s request for a preliminary injunction,” the judge’s order Wednesday says. “The State Superintendent is hereby enjoined from altering the recontamination status of the Districts except as authorized during the annual compliance provisions.”

Following the issuing of the TRO Wednesday, DeVore said due process is crucial to the case, but part of his argument was that schools with masks optional haven’t seen COVID-19 cases increase.

“While legally it doesn’t have anything to do with procedures that [ISBE has] to follow, it is something the courts have to consider when they try to balance the decisions they have to make,” DeVore said.

DeVore said Wednesday’s ruling should send a message to other districts that ISBE’s authority on the mask issue is a facade.

“And I hope school districts will take it upon themselves to do what they think they need to do without being scared,” DeVore said.

“You can’t change somebody’s recondition status unless they’re in clear violation of the law,” Wilhour said. “There is no law for the mask mandate.”

The next hearing in the Effingham County case is Nov. 8.

ISBE didn’t respond to messages seeking comment about the public schools case, but a spokesperson did say they are changing agency rules on how to deal with private schools that don’t follow the governor’s mandates. That follows last week’s case of a Kendall County judge siding with Parkview Christian Academy.

“ISBE’s priority continues to be protecting the health and safety of students and educators,” ISBE spokesperson Jaclyn Matthews said. “Moving nonpublic schools to probation instead of nonrecognition gives schools more time to work with ISBE on coming into compliance.

“ISBE staff will reach out to each nonpublic school to schedule a conference to discuss compliance issues,” Matthews said. “Within 60 days of this conference, the school is required to submit a corrective plan to ISBE.”

Wilhour said ISBE is out of control crafting rules arbitrarily. With inaction from the Legislature, the proper venue is the courts, he said.

“We’re setting a major precedent on how things are handled moving forward. We can’t just let these agencies run wild.”