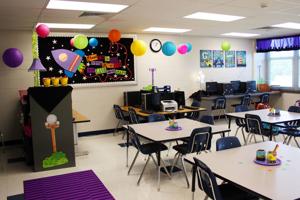 (The Center Square) – After a judge told a school district it couldn’t require masks for students without a quarantine order, the district reported fewer COVID-19 cases, but it has faced other consequences.

It comes as a member of the Joint Committee on Administrative Rules said there is further evidence the Illinois State Board of Education can’t revoke a public or private school’s recognition status for failing to follow the governor’s mask mandate.

Attorney Thomas DeVore said since securing a temporary restraining order enjoining the Hillsboro school district from mandating masks on children on Sept. 17, cases have gone down.

“I’m not saying that that’s conclusive, I’m just saying that that is information that suggests that masks on kids in this classroom is something that may not be necessary to prevent the spread,” DeVore said.

Before the TRO, numbers provided by Hillsboro schools show 22 cases in the first week of school. There were 11 cases the following week, then 13 and 11 in subsequent weeks.

While acknowledging cases are going down, Hillsboro Superintendent David Powell said there have been other consequences.

“When we were no longer requiring the masks, a lot of our students are not wearing masks, then the close contact tracing radius goes from three feet to six feet so we’re identifying a lot more kids as close contacts,” Powell said. “But also if both students aren’t masked, we lose the option to do the test-to-stay.”

The Test to Stay program allows a student who was in contact with a positive case to avoid a quarantine as long as they are asymptomatic. The student is then tested on days 1, 3, 5, and 7.

Powell said another consequence is some other schools aren’t willing to participate in extracurricular indoor activities with Hillsboro.

While Gov. J.B. Pritzker and ISBE have said they will take actions against schools for not following the mandates, Powell said he hasn’t heard back from ISBE on their recognition status. But other conversations have given him some indication.

“As long as the district is not requiring the masks in response to a court order that there wouldn’t be any sanctions placed against the district from the state board in regards to recognition, funding, any of those things,” Powell said.

But, ISBE Thursday listed four public schools districts as on probation. Hillsboro is not one of those.

There are eight nonpublic schools listed as non-recognized. Parkview Christian Academy, a private school, had its recognition instantly revoked for not having a mask mandate in place. But the school secured its recognition through the courts on Wednesday. ISBE lists that on the agency’s spreadsheet.

DeWitte, a member of JCAR, said the judge in the Parkview case highlighted how public schools have due process when it comes to being sanctioned by ISBE, but private schools do not, and that’s wrong.