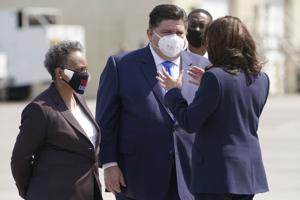 Every ten years the state Legislature redraws political boundaries. This year final Census data was delayed because of the COVID-19 pandemic. In May, Democrats approved along party lines maps based on estimates. The governor enacted those maps.

After final Census data was released in August, Democrats came back and again along party lines revised the maps. As they did in the spring, Democrats approved the maps hours after final drafts were made available, despite various civic groups urged lawmakers to slow down so the maps can be reviewed and input provided.

“These legislative maps align with the landmark Voting Rights Act and will help ensure Illinois’ diversity is reflected in the halls of government,” Pritzker said in a statement.

Madeleine Doubek, executive director of CHANGE Illinois, said it was another broken promise from the governor.

“Gov. J.B. Pritzker Friday fueled his litany of broken vows to the people of Illinois by signing into law maps that do not reflect the rich diversity of Illinois, but instead steal representation from Latino, Black and other Illinoisans who have repeatedly pleaded for equitable representation,” she said in a statement. “For the second time this year, Pritzker joined supermajority lawmakers in ignoring and disrespecting the input of constituents.”

But, before the maps were signed Friday, the Mexican American Legal Defense and Educational Fund opposed the maps in court saying it diminishes Latino representation despite a growing population.

“Latino voter eligible population districts that are a majority, above 50 percent, have gone down from the map that was in place in the last decade to the map that was just approved in August,” MALDEF staff attorney Ernest Herrera said last week.

Herrera said Illinois leading the nation in putting new maps in place is a red flag.

“So being first out the gate in this sense, is not necessarily good and in fact, it is part of why there was a potential violation of the voting rights act in the August maps,” Herrera said.

Republicans say Pritzker violated a campaign promise he wouldn’t sign partisan-drawn maps and want the map process taken over by a bipartisan commission, per the Illinois Constitution.