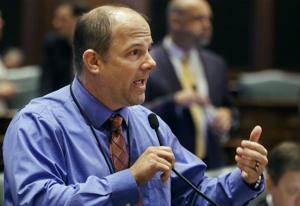 (The Center Square) – A state lawmaker says residents are demanding clear goalposts to aim for to relax COVID-19 mitigations such as mask mandates.

Nearing 20 months into the COVID-19 pandemic, executive orders from Gov. J.B. Pritzker on a variety of things ranging from economic restrictions to masks in schools, have gone unchecked by the Democrat-controlled General Assembly.

He wrote the governor a letter detailing a proposal with regionalized metrics to give assurances things like school mask mandates aren’t open ended.

“I think you’re able to actually maybe pick out breakouts sooner, and maybe put in some mitigations sooner but that also allows mitigation to be taken off sooner if you’re successful,” Batinick said.

He noted the governor’s economic restrictions last year imposed unilaterally that kept restaurants from having indoor dining was throttled with regionalized metrics triggering different phases and tiers of mitigation for different regions of the state. That’s not the case with the school mask mandate in place now.

In a letter to Batinick Wednesday the Republican shared with The Center Square, the governor said he does have some metrics in mind for relaxing the school mask mandate.

“That could include a significant reduction in transmission, the availability and utilization of vaccines for school-aged children under 12, an improving vaccination rate for children 12 to 17 and for adults that interact with the school community, and/or additional guidance from the CDC,” Pritzker’s letter said.

But using localized data “would be inaccurate, unfair and unworkable for example to tell kids that masks can be off on Tuesday only to put them back on by Thursday – and that chaos would be our reality until we might reach herd immunity as a state and as a nation,“ Pritzker said.

Nearly 20 months in, there needs to be public hearings, Batinick said.

“When you’re doing something for a couple of weeks, or a couple of months, that’s fine, but when you start putting a mask on a very young child in school, there are downsides to it,” Batinick said.

Young children need to see faces as part of cognitive development, he said.

Without public hearings, Batinck said there will continue to be resistance – even just because of the unilateral approach.

“At some point Democracy is at risk, right,” Batinick said. “We’re a coequal branch of government and we need to start acting like it.”

House Speaker Emanuel “Chris” Welch’s office has not responded to the questions about General Assembly’s decision not to take action on mask mandates.

Pritzker has said Illinois will follow the CDC guidance on masks in schools. It’s unclear when that could change.

“Creating rigid metrics in this changing landscape wouldn’t result in safer communities,” Pritzker’s letter to Batinick said. “While I wish I could provide a specific end date for the sake of convenience for all of us, this virus’ danger to people is diminished as our deterrence of it improves.”

“As for the statewide indoor mask mandate, I have repeatedly said that once Illinois has established a consistent downward trend on this current wave, we could reevaluate what the current recommendations are from the CDC and return to mask recommendations instead of a mandate,” Pritzker said.