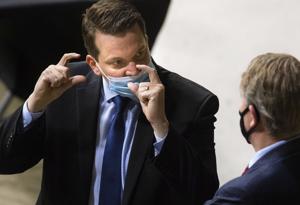 (The Center Square) – A first step has been taken in an effort to allow local authorities to make decisions about mask mandates at Illinois schools.

HB 4131 would allow a school board or the governing board of a public or non-public school the power to determine, in consultation with a local health department, whether to implement mask requirements for staff, students and visitors during a time when the Governor has declared a disaster due to a public health emergency related to COVID-19.

“If the governor believes that school boards are best suited to teach their kids, they should also be the ones that are tasked with keeping our kids safe,” Chesney said. “That’s why they have student counselors and resource officers to make sure that they’re protected. I don’t understand why local school boards, in consultation with the local health departments, can’t decide if they want to wear masks or not. Just let them decide.”

He said lawmakers have been too timid during the pandemic and should step forward to assert themselves as part of the governing process.

“The legislature has been accepting the position that they just don’t want to legislate,” Chesey said. “They don’t want to lead. And they’re going to allow the governor just to run this state like a king.”

Chesney admits that with a Democratic supermajority in the House and the Senate, it will take plenty of outside pressure to force a change.

“Simply put, they’re not going to buck the governor unless their constituency overwhelmingly feels this way,” Chesney said. “The parents are going to have to be outraged. I’ve already had a number of calls from people I’ve never known from the Chicagoland area who have suggested their support. The suburban moms … they gotta start calling their legislators and asking them to support this bill. Because this is absolutely getting crazy.”

Chesney previously has encouraged everyone who wants to get a COVID-19 vaccine to get vaccinated as soon as possible, and he says he doesn’t have a problem with masks themselves.

“Where I take exception is these mandates,” Chesney said. “The Democrats are playing politics with this. They’re not following science. And I think they’re intentionally destroying our economy to push a progressive agenda.”

Fourteen states, including Illinois, currently have a statewide mask mandate for people at schools regardless of vaccination status.