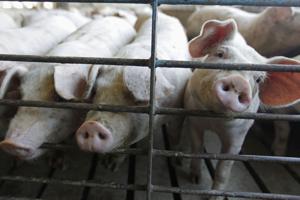 (The Center Square) – Illinois pork producers who sell meat to California are frustrated and confused by Proposition 12, a California ballot measure that will affect the way they raise their hogs.

Tasha Bunting, associate director of commodity and livestock programs for the Illinois Farm Bureau, said that the new regulations are set to go into effect in January, but they have yet to be finalized.

“Prop 12 really doesn’t have all of their rules implemented yet. What exactly it is going to look like hasn’t been finalized,” Bunting said. “It is really putting our producers behind the eight ball from the get-go,” she said.

Twenty-four square feet of space is required for gestating sows. Farmers, scientists and veterinarians in Illinois question the logic behind that standard.

“Those rules are not consistent with what we know good animal husbandry practices are,” Bunting said.

Congresswoman Cheri Bustos commented on the predicament when she visited a pork farm in her district this summer.

“Members of the public who have never set foot on a family farm do not understand what it takes to get the job done,” Bustos told WMBB on her tour.

“For a state that doesn’t have a lot of pork production, California is really setting the guidance for the industry,” Bunting said.

California’s clout comes from its 40 million residents who buy 14% of the pork products produced in the United States.

“We have seen some estimates that say it will add $15 to $24 dollars a sow per year to comply with these new requirements,” she said.

The North American Meat Institute, the American Farm Bureau Federation and the National Pork Producers brought litigation last year to try to stop California from implementing the new regulations. The lawsuits were dismissed earlier this summer. Bunting expects other groups and some states to also mount challenges, she said.

In the meantime, Prop 12 regulations are an additional factor that is driving consolidation in the pork industry, she said.

“Some experts have told us that we will continue to lose more of the smaller, independent producers who cannot make adjustments as quickly as larger groups can,” Bunting said.

“As pork producers have to shift into whatever this new production system may look like, it will most likely raise the pork prices in other parts of the U.S. as well,” Bunting said.