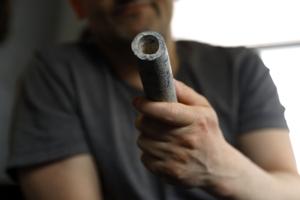 (The Center Square) – Gov. J.B. Pritzker signed a bill to remove and replace lead service lines throughout the state, a vast undertaking that could costs hundreds of millions of dollars and create thousands of new jobs.

Illinois becomes the second state in the nation to approve legislation to require the replacement of lead drinking water pipes, which can deliver toxic lead in each glass of water.

Illinois has more lead pipes than any other state in the nation, with at least 686,000 connecting homes to water mains, and based on a 2020 Metropolitan Planning Council (MPC) report, Black and Latin communities are affected the most.

“Now that it’s on the books, this new law will prioritize some of Illinois’ most vulnerable, as communities of color see the majority of lead service lines in our state. Everyone deserves clean drinking water,” he said.

The replacement process will create a number of jobs for Illinoisans according to a report from the MPC, over 20 years of lead service line replacement could create around 11,225 jobs per year and over $1 billion in related economic activity.

While jobs will be created, Illinois also might require some tax-payer funding, according to deputy director of the Illinois Environmental Council, Colleen Smith.

“We are really pushing for that federal funding,” Smith said. “There was money passed through the American Rescue Act that we believe can help but in order to do this effectively we are going to need municipal, state, and federal help.”

Advocates of President Joe Biden’s Build Back Better agenda are calling on Congress to secure $45 billion in federal funding nationwide.

Jeremy Orr, senior attorney for the Safe Water Initiative at NRDC, said that Illinois will be ready when the funding comes.

“Lead in drinking water is one of the biggest environmental health threats facing Illinoisans and people throughout the country, but this law will make the state a leader in equitably fixing the problem,” Orr said. “As lawmakers in D.C. consider a federal infrastructure package, Illinois is ahead of the pack in showing it is ready to put those infrastructure dollars to work.”