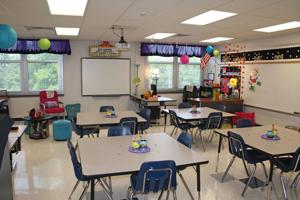 (The Center Square) – With thousands of students across Illinois being told to quarantine because of possible exposure to someone with COVID-19, there’s growing concern about in-person education.

The Illinois State Board of Education says in its guidance that a quarantine can happen when “identifying people who have a confirmed or probable case of COVID-19.” ISBE also says that local health departments will make the final determination on who is to be quarantined and for how long.

“This includes asking people with COVID-19 to isolate and their contacts to quarantine at home voluntarily,” ISBE’s guidance says.

A Clinton County judge Monday said a school district can not keep a student from in-person education without a formal quarantine order from the local health department.

Last week, the district announced it was going to remote classes. Messages seeking comment from the district’s superintendent were not returned.

Parent’s attorney Thomas DeVore said the issue is about due process and students having a right to in-person education.

“The judge even used the word ‘dictatorship’ if that’s allowed to happen and the judge said ‘no, you cannot on your own without the health department doing it send these children home and remove them from school, you don’t have that authority,’” DeVore told WMAY.

DeVore said the quarantine process requires official orders that the parents can comply with or force the issue in court.

“They can issue a 48-hour emergency order, but then they have to go to court and get the court to issue an order of quarantine,” DeVore said.

Just south of Springfield, an entire high school went to remote learning and suspended sports. This follows a walk-out protest by dozens of students, parents and some staff critical of quarantine rules.

“We are in full remote at the high school as of today and through Labor Day,” North Mac School District Superintendent Jay Goble said in an email Tuesday. “The student protest is an internal matter and that will be handled at the school level. We can’t make any comments regarding that at this time.”

Goble also confirmed that sports are suspended at the district until after Labor Day.

North Mac parent Dale Kuhar said his student-athlete joined several dozen others protesting quarantine rules by walking out of the school Monday. He said he was told his student was exposed to a positive case, was then allowed to go to school but then told he had to quarantine along with others on the football team, affecting the team’s ability to compete in upcoming games.

Kuhar questions the motive for going into full remote and suspending sports at North Mac.

“It’s awfully funny, that sounds like retaliation for the walkout and the big event,” Kuhar said.

For parents in North Mac that got an email from the health department, DeVore said that’s not enough.

“That email has no force and effect of law,” DeVore said. “These health departments for the most part don’t even know what they’re doing. A quarantine email is not an order of court [and] it’s not an emergency order.”

Parents have the right to challenge quarantine orders in court with the burden being on health departments to prove a student is a public health threat and must be quarantined.

A dashboard for Springfield District 186 shows of the more than 13,300 enrolled students and 2,100 staff at the district’s schools, 975 students and 25 staff are quarantined. Of that, 403 students and 179 staff tested positive.