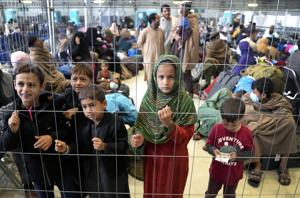 (The Center Square) – Hundreds of people rescued from Afghanistan after the Taliban takeover will be coming to Illinois in the coming months.

At a news conference Monday with the Refugee Action Network Coalition, U.S. Sen. Dick Durbin, D-Illinois, and others discussed how Illinois will respond to the flood of refugees coming to Illinois and the United States.

Durbin said he helped develop a streamlines process for refugees to gain Special Immigrant Visa status, but assures that everyone will be thoroughly checked out.

“We check their backgrounds carefully to make sure that they will be a positive force in this country, and we also understand that their families will be part of the process and part of the future,” said Durbin.

The estimated 500 Afghans arriving in Illinois will be supported by resettlement agencies to provide housing, employment resources and other services. The coalition said it has been accepting donations to help cover the costs.

It is estimated about 100 people from Afghanistan will settle in Illinois. Others go to areas with larger Afghan populations, such as Pennsylvania, California and the Washington D.C. area.

“We have to ensure that all refugees have the resources and support they need when they relocated to America,” said Congresswomen Marie Newman, D-Illinois. “This is really critical.”

President Joe Biden’s administration has been criticized for the sudden fall of the Afghan government and the ongoing troop pullout in Afghanistan. The Pentagon is winding down evacuations from the main airport while officials warn the threat from ISIS-K militants remains high.

A suicide bombing outside an airport gate last week claimed the lives of 13 U.S. service members and 170 Afghans. ISIS has claimed responsibility.

“The President is preparing to leave Americans and allies we made distinct promises to behind. Indeed, he admitted last week that getting every single person out cannot be guaranteed,” House Minority Leader Kevin McCarthy said in a letter to his members.