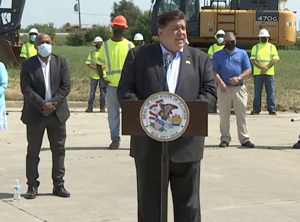 (The Center Square) – Gov. J.B. Pritzker said vaccinations will pick up in Illinois after the U.S. Food and Drug Administration granted full approval to the Pfizer vaccine, it could also lead to additional vaccine mandates.

The vaccine now carries the strongest endorsement from the FDA, as the United States becomes the first country to fully approve the shot.

At the University of Illinois in Champaign-Urbana on Monday, Pritzker said those who thought the vaccine was approved too quickly can rest easy.

“Now literally almost a year later, we now have so much research to show that these work,” he said. “I’m very happy about that. I think that means that many more people will choose to get vaccinated.”

A Kaiser Family Foundation survey from June found that 3 in 10 vaccinated adults would be more likely to get the shots if a vaccine were fully approved.

More than 200 million Pfizer doses already have been administered in the U.S. Many Americans may have held off receiving the COVID-19 vaccine, arguing the FDA had not given full approval. Private companies and institutions have also held back implementing vaccine mandates, citing the same concern.

“I do think there will be private institutions requiring vaccinations now that it is no longer under EUA (Emergency Use Authorization),” Pritzker said.

Pritzker has mandated that all state employees who work in congregate settings such as nursing homes and prisons be vaccinated by early October.

U of I Chancellor Robert Jones said the school already had a vaccination mandate in place.

According to the Illinois Department of Public Health, more than 77% of Illinois adults have received at least one vaccine dose and more than 60% are fully vaccinated, according to data from the Centers for Disease Control and Prevention.

Pfizer’s vaccine is one of three in use in the U.S. Moderna has also applied for full approval. Johnson & Johnson, the only single-shot vaccine, has not yet to apply for full approval and remains in use under emergency authorization.