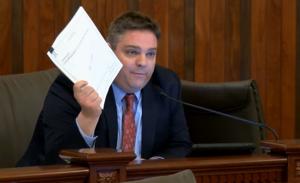 (The Center Square) – A doctor who was the target of a Pritzker administration professional licensure investigation has nothing further to say about the matter, but some at the Illinois statehouse want more information.

State Sen. Chapin Rose, R-Mohamet, early last week said his constituent, Dr. Jeremy Henrichs, was being investigated by the Illinois Department of Financial and Professional Regulation for his stance as a school board member on mask use for students. The agency has the authority to issue and revoke licenses for doctors.

On Friday, Rose shared a written apology letter from the agency to the doctor.

“Please disregard the questions posed in the emails of August 11 and 17, 2021,” IDFPR General Counsel Dina Torrisi Martin said in a letter to Henrichs’ attorney Jerrold Stocks. “On behalf of the Department, I sincerely apologize for the tone and content of those communications.”

“Dr. Henrichs appreciates that [Martin] has apologized,” the statement said. “He further acknowledges and appreciates the fact that acting IDFPR Secretary Mario Treto Jr, has said, ‘our preliminary review of this complaint has concluded and the strong recommendation to the Medical Disciplinary Board will be that this complaint be closed’ when the Board meets on September 1, 2021.”

The statement also says Henrichs appreciates support from “numerous family, friends, and the countless strangers who have come to his defense, but “until this complaint has, in fact, formally been dismissed, Dr. Henrichs has nothing further to say at this time.”

State Rep. Tim Butler, R-Springfield, said the tone of the investigation was heavy handed and lawmakers need to know more through public hearings.

“I’d love to know what the conversations were within the agency,” Butler told WMAY Monday. “I’d love to know the conversation that possibly took place with the governor’s office. Was the governor’s office involved with this. Obviously, this is something that’s been high on the agenda with the mask mandate and I think all of this needs to come to light.

The department has not responded to messages seeking comment. A Freedom of Information Act request is pending.

Butler said there should be public hearings to get to the bottom of what happened.

“This should not happen,” Butler said. “This should not happen in the United States of America and I think this is really what scares so many people about government when you see the heavy hand like this come in and really try to eliminate a person’s livelihood just because of the positions that they hold personally.”

Despite the apology and the recommendation the investigation be closed, Rose said his ethics complaint against the agency’s actions continues.