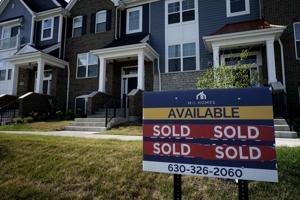 (The Center Square) – For the last decade, the American dream of building a home and settling down rarely occurred in Illinois.

A new report from the Illinois Policy Institute finds Illinois ranks 48th in the nation for home construction by population. The only states to have constructed fewer homes relative to their population since the Great Recession were Connecticut and New York.

“It is no surprise to see Illinois lagging behind the rest of the nation when it comes to new home construction because unfortunately people continue to move out of the state, and without people, there is not really room to be building new houses,” said Bryce Hill, senior research analyst with the Illinois Policy Institute.

Hill said one major reason why building homes in Illinois hasn’t made sense for an increasing number of families is the state has the second-highest property taxes in the country.

“The residents are getting fewer and fewer services in exchange for their tax bills because higher shares of property taxes and state tax dollars are going to pay for our unfunded pension liabilities,” Hill said.

The states that have seen the largest spike in new home construction during the decade were Florida, Colorado, Utah, Idaho and Arizona, according to the report.

Recently, a lack of inventory is forcing some to build from the ground up. According to the National Association of Home Builders, the count of single-family homes currently under construction is 675,000, up 32% compared to a year ago.

New construction projects are picking up in Illinois, but not as robustly as in other states. In Chicago, for example, home construction is up 85% since 2009. But a check of similar cities shows Atlanta is up 428%, Phoenix is up 268% and Miami is up 241%.