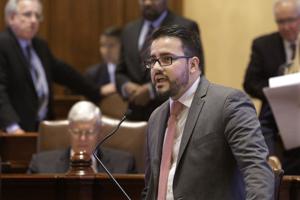 The bill would restrict local law enforcement from working with ICE and close immigrant detainment centers across the state.

The bill was filed by state Sen. Omar Aquino, D-Chicago, in an effort to provide protection for immigrants from local law enforcement. State Rep. Elizabeth Hernandez, the House sponsor, said the legislation could help the relationship between the police and immigrants and take some of the fear out of talking to the police.

“Immigrant families continue to fear interaction with police due to the ongoing police cooperation with federal immigration enforcement.” Hernandez said. “When immigrants do not come forward and work with the police, the whole community suffers.”

The legislation will restrict ICE from working with local police departments in the state. Restrictions on participation in raids, sharing of information and the end of detainment camps will be some of the new rules for local police and immigration.

State Rep. Patrick Windhorst, R-Harrisburg, has taken issue with the Way Forward Act, specifically with the closing of detainment centers across the state. The closure of these centers, Windhorst said, could lead to job cuts and revenue losses for the counties that house them.

“These camps are in two of the poorest counties in Illinois, this will have a very detrimental impact on these counties.” Windhorst said. “They are speaking of layoffs into the eighties, there is talk that mortgages could be defaulted on, this could be very dangerous for the county.”

Windhorst also brought up the issue of these immigrants being sent out of state away from their families once these detainment centers close.

“We would then as a state lose the ability to have oversight on what is going on if those facilities as it relates to detainees. They could end up in another state that might not be as friendly,” Windhorst said.

The bill was recently sent to the desk of Governor J.B. Pritzker and will become effective immediately if signed. Lawrence Benito, executive director for the Illinois Coalition for Immigrant and Refugee rights called the new act a win for immigrant communities.

“This marks a win for immigrant communities, as we are one step closer to making Illinois the most welcoming state in the nation,” Benito said. “We thank the senators who listened to our communities and voted yes on Illinois Way Forward.”