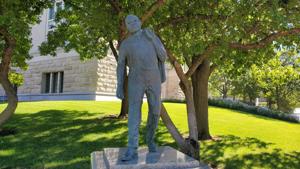 (The Center Square) – Illinois has created a task force to investigate controversial statues around the state and if new monuments should be erected to commemorate minorities.

At a hearing on Wednesday, task force members took aim at the Martin Luther King Jr. statue near the Capitol in Springfield, but not because it is offensive. Many say it isn’t a good likeness.

Secretary of State Jesse White, who said he didn’t know who the statue was when he first saw it, has offered $5,000 of his own money to jump-start a campaign to replace it.

“Not only with Dr. King, but with other statues that may not reflect the true image of the individual to do all we can to number one, get a better image, and number two, have a better placement for it,” White said.

The existing statue stands at the corner of Second Street and Capitol Avenue across from the State Capitol building.

Last summer at the Capitol, the Stephen A. Douglas statue was taken down because the legendary Illinois Senator owned slaves. Some historians argued that Douglas’ debates with Lincoln and later support of his rival as president, who eventually engineered the end of slavery, outweighed his ownership of slaves.

“We are not erase history, but to ensure that artwork reflects the morals and values and all communities in Illinois,” said state Rep. Mary Flowers, the chair of the task force.

Flowers has suggested the task force consider adding monuments to the Capitol grounds commemorating former President Barack Obama as well as Ida Wells, co-founder of the NAACP and several others.

During an earlier hearing, an assistant professor from New York cautioned the task force against going overboard, noting that the Texas Capitol grounds have over 20 statues and monuments.

The city of Chicago is also undertaking an examination of its statues, temporarily taking down two Christopher Columbus statues last summer. A commission has earmarked around 40 monuments for review as part of a “racial healing and historical reckoning project.”