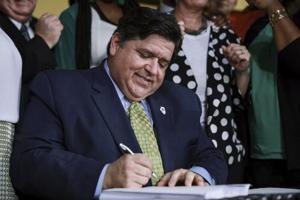 (The Center Square) – A bill changing various aspects of how the state will regulate ethics will soon be up to the governor, but some are urging him to use his amendatory veto power to strengthen the measures in an effort to reduce corruption.

“I think it’s a good start, what got passed. More is needed,” Pritzker said. “There also are provisions, very important provisions, focused on ethics that are in a draft of the energy bill that we put forward.”

The energy bill has yet to be released. The ethics package is poised for the governor’s desk.

Reform For Illinois Executive Director Alisa Kaplan urged the governor to strengthen the reforms with an amendatory veto.

“Show us you were serious when you said there was a need for reform and that you wanted to get it done and use the powers you have as governor to strengthen this bill,” Kaplan said. “We’ve waited long enough. The people of Illinois have waited long enough for real reform.”

Even as lawmakers acknowledged it doesn’t go far enough before they passed it unanimously in the Senate and 113 to 5 in the House.

“Right now we have no trust, we have no credibility with the citizens in this state,” said state Rep. Blaine Wilhour, R-Beecher City, during floor debate before he voted against the measure. “The citizens don’t trust the people in this body and they shouldn’t. We don’t deserve it.”

“When are they going to do it?” Kaplan said. “We just had Tim Mapes indicted right before they passed this bill. What more do we have to see happen before they really get serious about reform.”

Mapes, former chief of staff and Clerk of the House for former Illinois House Speaker Michael Madigan, D-Chicago, was indicted by federal prosecutors for lying to a grand jury in the ComEd bribery scheme. Last summer, the utility admitted it paid money and jobs to Madigan associates over the span of nearly a decade in an effort to influence the then-speaker.

There were a string of other indictments against other state officials for bribery, tax evasion and embezzlement.

Under the bill poised for the governor’s desk, Kaplan said the prohibition on lawmakers quitting to become lobbyists has a loophole “so big you can drive a truck through it.”

“If someone retires at the end of one General Assembly and wants to lobby the next one, the next day, they can do that under this bill, so it’s really just kind of a shell of a revolving door provision,” Kaplan said.

Reform For Illinois and other groups said the prohibition should be at least a year, if not two years. Instead, the bill provides a six-month prohibition. But, the measure specifies the former member can’t lobby the General Assembly “of which he or she was a member.”

Kaplan also said while the Legislative Inspector General no longer has to get permission to investigate claims against lawmakers in the bills, they still must get permission from a panel of lawmakers to do certain things like subpoena testimony or evidence or to publish reports.

If the governor does issue an amendatory veto, it would have to be taken up and concurred on by both chambers. If they don’t concur, the bill dies.