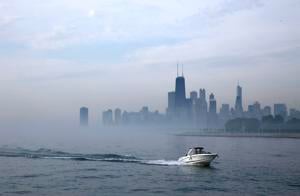 (The Center Square) – More boats are expected on Illinois waterways this summer than ever before, according to the Illinois Department of Natural Resources (IDNR).

“We are out here trying to keep people safe,” Wire said.

Wire says there are too many distractions out on the water – including paddle crafts and jet skis – that are easy for power boaters who are not paying close attention to see.

“If we come across boaters who are intoxicated, they will be arrested,” he said.

Wire recommends naming a designated helmsman to stay sober and drive the boat, the way people choose a designated driver when they go to a party.

“A boat is a piece of heavy-duty equipment that does not have brakes,” Wire said.

Every person in the boat should be wearing a life vest. Nationwide, 86% of people who drowned in boating accidents last year were not wearing life vests. Other required safety equipment on boats include a properly charged fire extinguisher, a working horn and whistle and working navigation lights and flares.

One important piece of safety equipment often goes unused – even by experienced boaters, Wire says. Engine cut-off switches (ECOS) and links or lanyards that shut the boat motor off if the boat operator falls or gets knocked out of the helm are now required by a new federal law that took effect in April.

“Nobody ever thinks that they will be thrown out of their boat, but it happens all the time,” Wire said.

Without a helmsman, the boat will either spin in circles or just keep going straight. The driver can get run down by their own boat, or watch the boat run loose – until it runs out of gas or hits something.

A video put out by the U.S. Coast Guard shows lifelong boaters Clay and Blake Brussard’s Bass Boat getting ejected from their speeding bass boat in a split second when Blake missed a warning buoy while checking his GPS.

The father and son’s high-tech life jackets deployed within five seconds, saving them from drowning. Minutes later, they narrowly missed being run over by their runaway bass boat.

“The kill switch needs to be connected to your body, and not taken for granted,” a chastened Blake Brussard tells boaters in the video, which has gone viral.