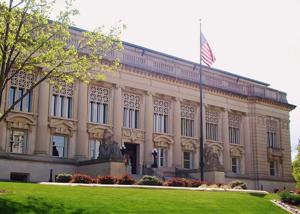 (The Center Square) – As Illinois Democrats forge ahead with remapping legislative districts without official Census data, the Illinois Civil Justice League is warning that Supreme Court districts may be getting a makeover as well.

The ICJL warned that a Democratic majority in the General Assembly might use redistricting as a means to retain a majority on the Supreme Court.

James Brunner, a clerk at the Illinois Supreme Court, said he has heard nothing about redistricting.

The maps have not been redrawn in 50 years, and Republicans have never held a majority on the Court under the 1970 Constitution.

Third district voters shook things up last year by denying retention to Justice James Kilbride, who won the seat as a Democrat in 2000.

“The defeat created an opportunity for Republicans to win that seat, which is now leaning Republican,” said John Pastuovic, president of the Illinois Civil Justice League.

Also next year, Second District voters will replace Justice Robert Thomas, who won his seat as a Republican.

In response to the possibility the Supreme Court maps are being redrawn, the ICJL issued a whitepaper to help legislators, decision-makers and the general public understand the requirements and challenges of the process.

The Constitution sets the number of justices at seven: three elected from Cook County and four elected from downstate districts.

The Second through Fifth districts previously met a constitutional requirement of substantially equal population, but now they are far apart. The Census Bureau estimated the Second District population at 3,194,413 in 2019, while the Fifth District was estimated at 1,270,953.

Boundary changes could remedy the problem, but the ICJL drew up a map of nearly equal population and spotted possible problems.

“You would have a Fifth District, which is the southern Illinois district, would grow to be geographically half of the state,” said Pastuovic.

The new Fifth District would encompass 57 counties, which is more than half of the county courthouse in Illinois.

The paper notes that substantial growth in suburban Chicago combined with changes to voting patterns in those counties provide an opportunity for Illinois Democrats to change the four districts to provide for two tossup suburban districts as a means to retain a majority on the state Supreme Court.

“A decision to remap the Supreme Court districts will set off a chain of events that will result in sweeping changes to Illinois’ judicial branch, requiring among other things, that some sitting judges may need to move or retire,” Pastuovic said.