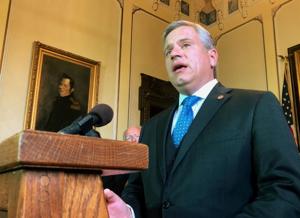 (The Center Square) – Members from both sides of the aisle at the Illinois statehouse say they’re taking small steps to save taxpayers on the $140-plus billion unfunded liability of public sector pensions.

State Sen. Robert Martwick, D-Chicago, said after the legislature changed the pension plans a decade ago from Tier I to a plan with fewer benefits, Tier II may not cut it for some retirees. He passed Senate Bill 1675 requiring more state employees to save more on their own through a deferred compensation plan.

“So it doesn’t cost the government anything,” Martwick said. “It costs the pension systems a small amount of money in administration compared to their larger pot.”

The annual amount of the state budget to cover pension payments for the five funds the state manages is approaching nearly a quarter of every tax dollar the state takes in. The unfunded liability is more than $140 billion, but some estimates put the figure closer to $300 billion unfunded liability.

“You don’t want the social cost of having a dependent class,” Batinick said. “It’s not insignificant, so the more we can do to encourage people to save I think is a good thing.”

The measure would make the deferred compensation a default position that employees could opt out of if they desire. Senate Bill 1675 is in the House and on the consent calendar, which could pass with other non-controversial measures sometime this week.

Another effort Martwick said saved taxpayers money is the limited pension buyout plan passed several years ago for some state employees and retirees was successful in saving a projected $1 billion in the state’s unfunded liability.

“We are considering reopening another window to give more employees, give them that option so hopefully we can have more savings to come,” Martwick told WMAY.

Batinick agreed with the estimated savings. He said there are other steps that need to be taken.

“Expanding the program would be huge,” Batinick said. “Another thing is is the sort of thing that we did making sure to get a better rate of return. Making sure that in the marketplace when private equity firms are chasing money, or money is chasing them, that we have access to the best investments.”

Batinick urged lawmakers to not limit, beyond what the federal government limits, what companies public dollars can invest. He also urged lawmakers against any piecemeal benefit enhancements that could increase the growing liability.