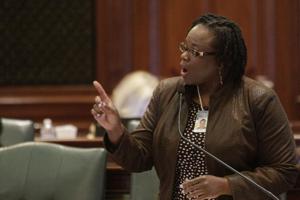 (The Center Square) – Forty years after the AIDS crisis, Illinois has a law on the books that makes transmission of HIV a crime.

“As a tool, this law is not just. It is not equitable,” Ammons said. “And it makes no sense as a tool in the criminal legal system.”

Ammons sponsored an amendment in the Illinois House this spring that decriminalizes transmission of HIV.

The measure was approved by House members April 20, with a bipartisan vote of 90-9. It is now undergoing consideration in the state Senate.

Ammons said the 1989 law was rarely invoked because “evidence of people passing HIV on just wantonly is not sustained.”

In 1994, Texas decriminalized HIV transmission. It is time for Illinois to do the same, she said.

“COVID is certainly more dangerous, and we would not criminalize COVID,” she said.

Ammons said she believes that having the 1989 law criminalizing HIV transmission on the books is “dangerous” because people are afraid to get tested for HIV because of the stigma of being labeled HIV positive.

State Sen. Robert Peters, D-Chicago, is shepherding the effort to decriminalize HIV in the state Senate, where he is optimistic that it will pass.

“Oftentimes, when we’re dealing with a crisis, with pain, with struggle, we turn to criminalization in an effort to deal with it,” Peters told NPR Illinois.

In Peters’ view, having a law on the books that makes HIV transmission a crime is a misguided attempt from an earlier age when people knew very little about HIV, and there were no proven treatments, Peters said.